Skip to content
I know it’s been quite a long time since I last uploaded a blog post but uni kept me quite busy and another reason that kept me away from writing was the visit of a lovely friend of mine, who I hadn’t seen for about 9 months and so I obviously spent my time with her to catch up on things.
I just thank god for modern technology and inventions like Skype, Facebook and WhatsApp, which make it possible to keep in touch without living close to each other, otherwise I wouldn’t know how to cope with barely seeing her.
During her visit, I decided to take her on a day trip to one of Italy’s most historical and most beautiful cities as it’s just an four hour bus ride to get there from my place.
The city I’m talking about is Venice.
It actually still impresses me how mankind was able to build up such a massive, thriving city only on wooden piles, which are nowadays supported with steel obviously as wood is a natural material which shows wear marks after being surrounded by salty ocean for such a long time.
Unfortunately Venice didn’t welcome us with its best weather, actually, it felt like the end of the world at first. It was pouring rain and our shoes were soaked after what felt like ten seconds after we had left the terminal for the train that had brought us to Venice from the bus terminal we had arrived at before.
As patience is the best recipe in such cases most of the time we decided to just wait until the weather had calmed down a bit and it really did after a couple of minutes. I was kinda relieved because I wasn’t to keen on spending my entire day in a cold, boring train terminal.
The weather kept changing throughout the whole day but fortunately it didn’t come back as worse as it had been in the beginning.
Venice is a magical city. Exploring the small alleys and sideways and passing all those small and big channels that run through the city like veins, gives you the feeling of being in a completely different world far away from everything else. The city’s atmosphere is captivating, it takes you in within seconds and you can’t stop looking around, trying to breathe in as much of the natural magic as you can. (Even though you should actually be careful with breathing in too deeply because the city has very varied scents, to express it politely xD) 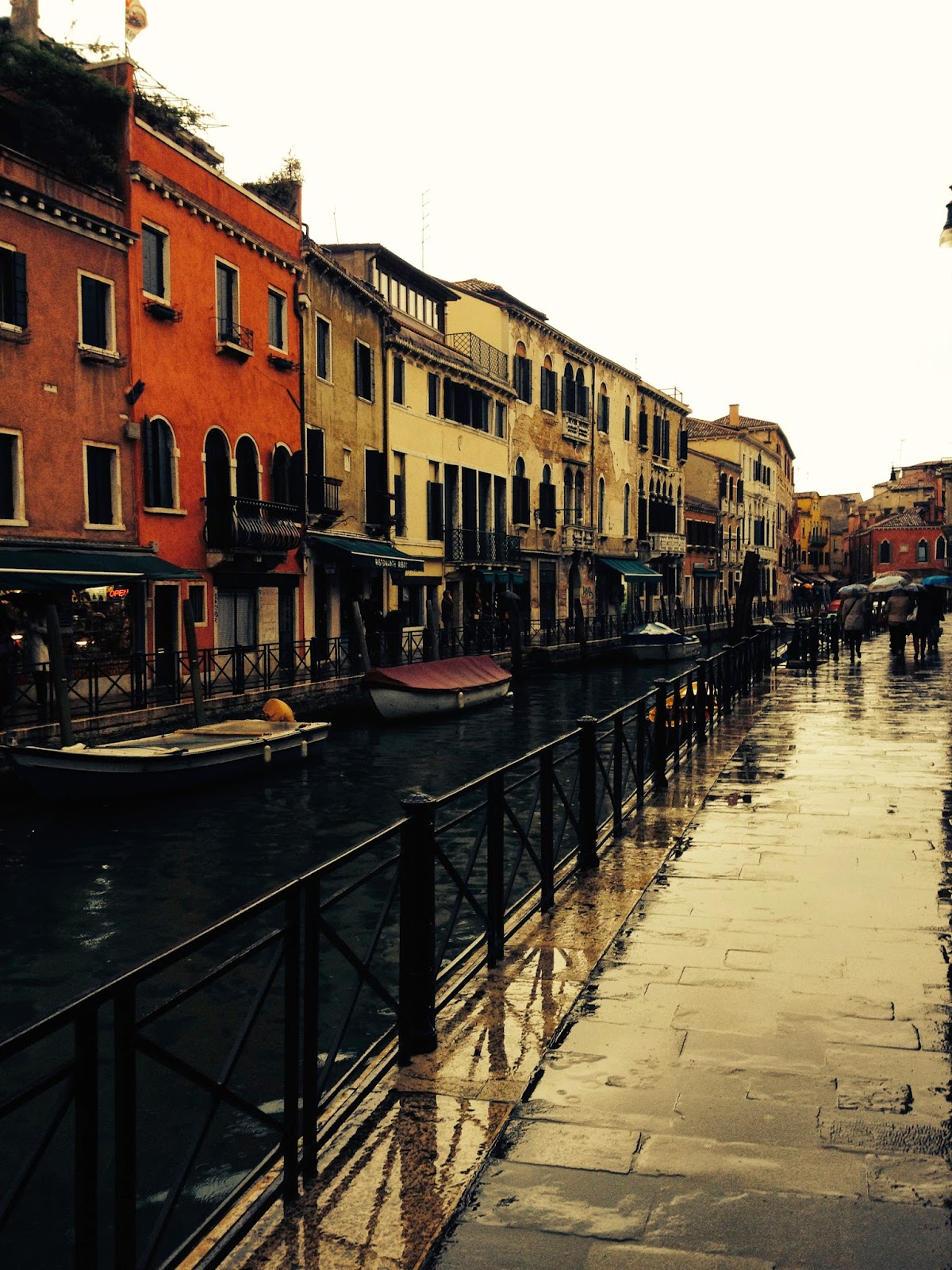 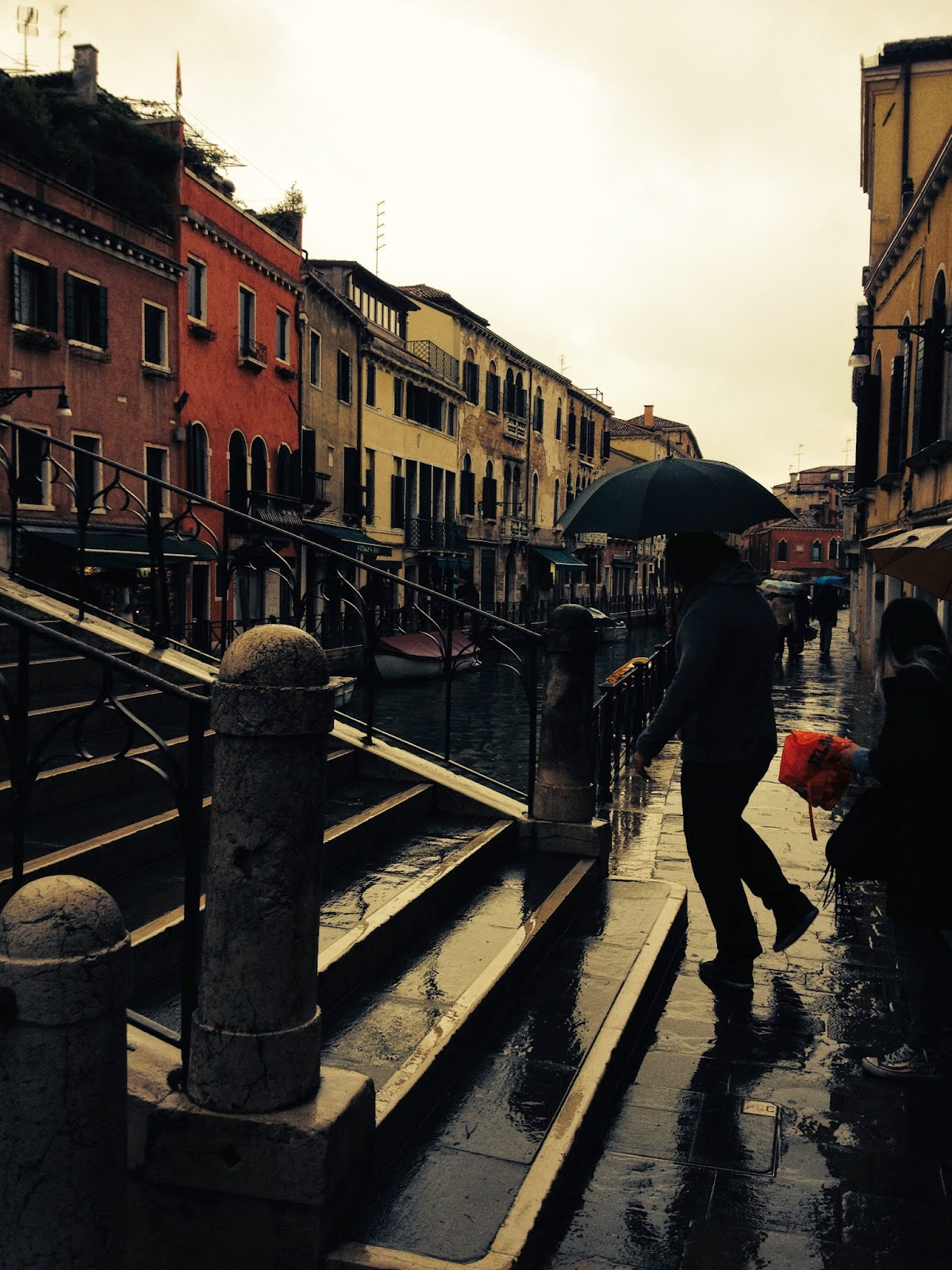 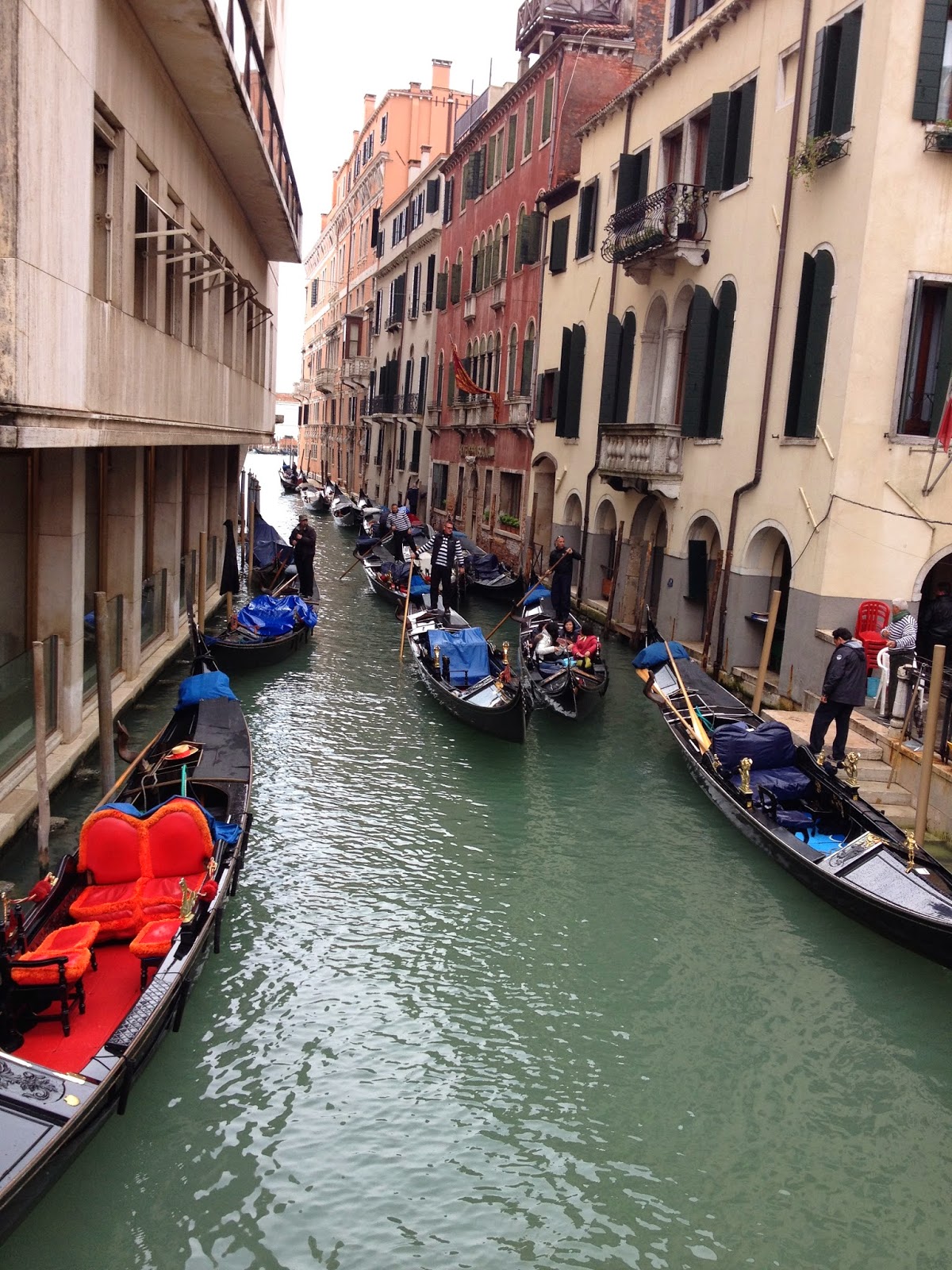 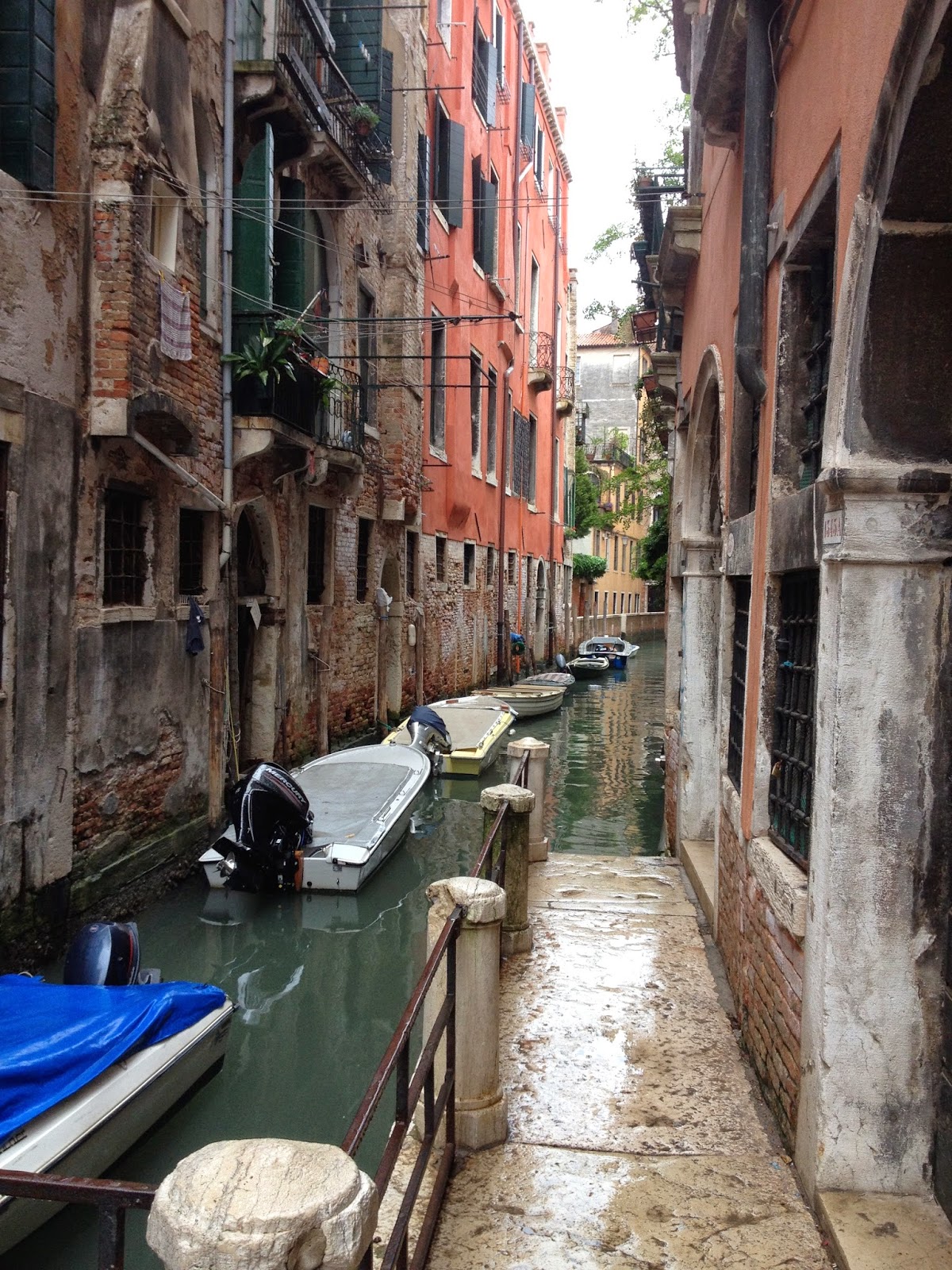 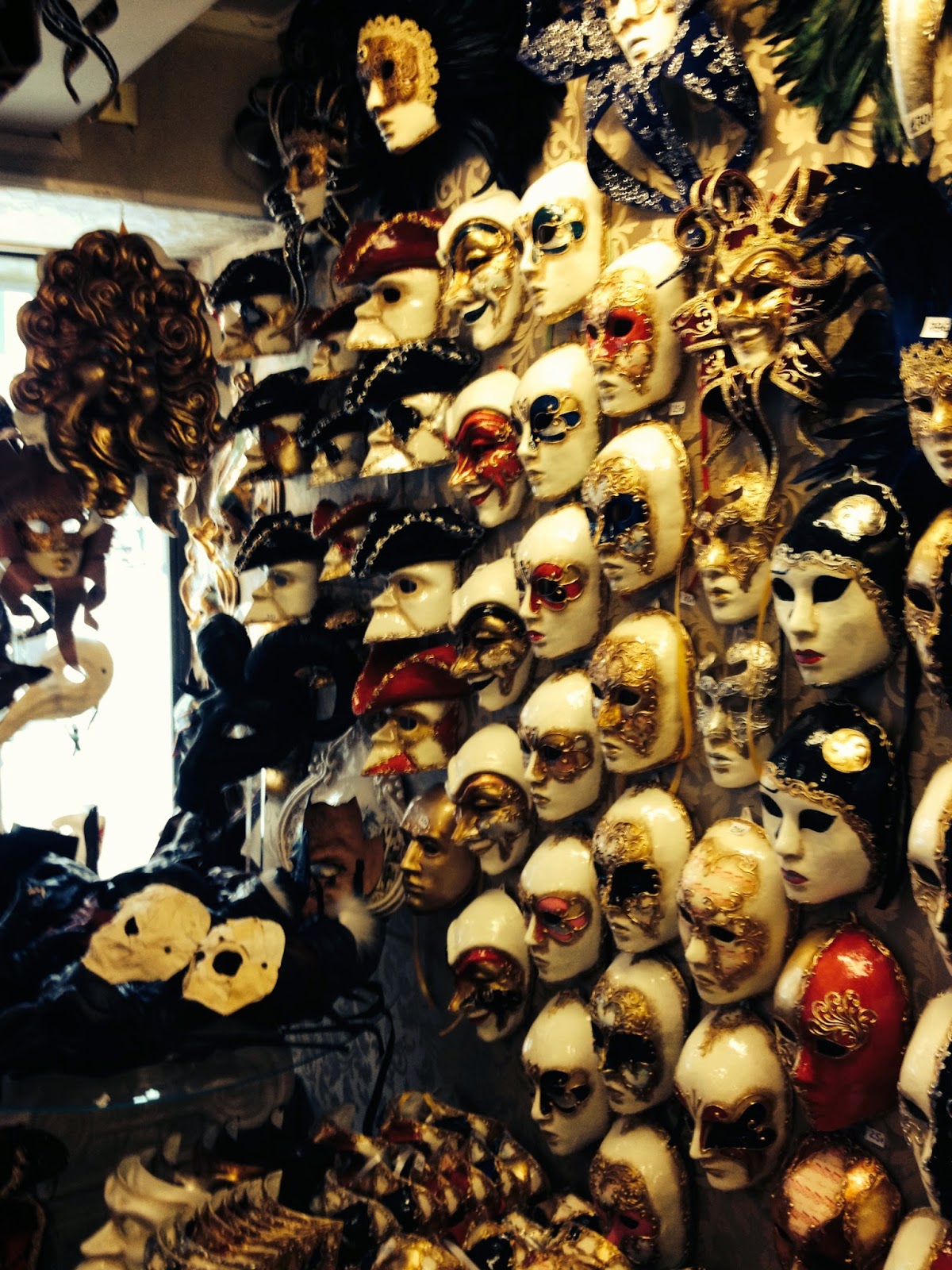 What I didn’t expect was that there were still so many people rushing through the narrow streets even though the weather was far from being somewhat tourist-friendly.
The heart of the city is definitely St. Marcus square and Canale Grande is the main vein dividing the city but connecting it at the same time again. It’s like you can feel the life pounding through that small town and the main channel is bringing the city to life.
The waterways are full of gondolas, water taxis, water busses and small private boats and people are busy getting from one place to the other. It’s a breathtaking thing to watch.

St. Marcus square was crowded with people that day, tourists wherever your eyesight took you, all of them busy taking pictures or queuing to get into the cathedral or get the chance to get to the top of St. Marcus Tower.
Our time was limited so we decided to be satisfied with the exterior view of the impressive buildings. 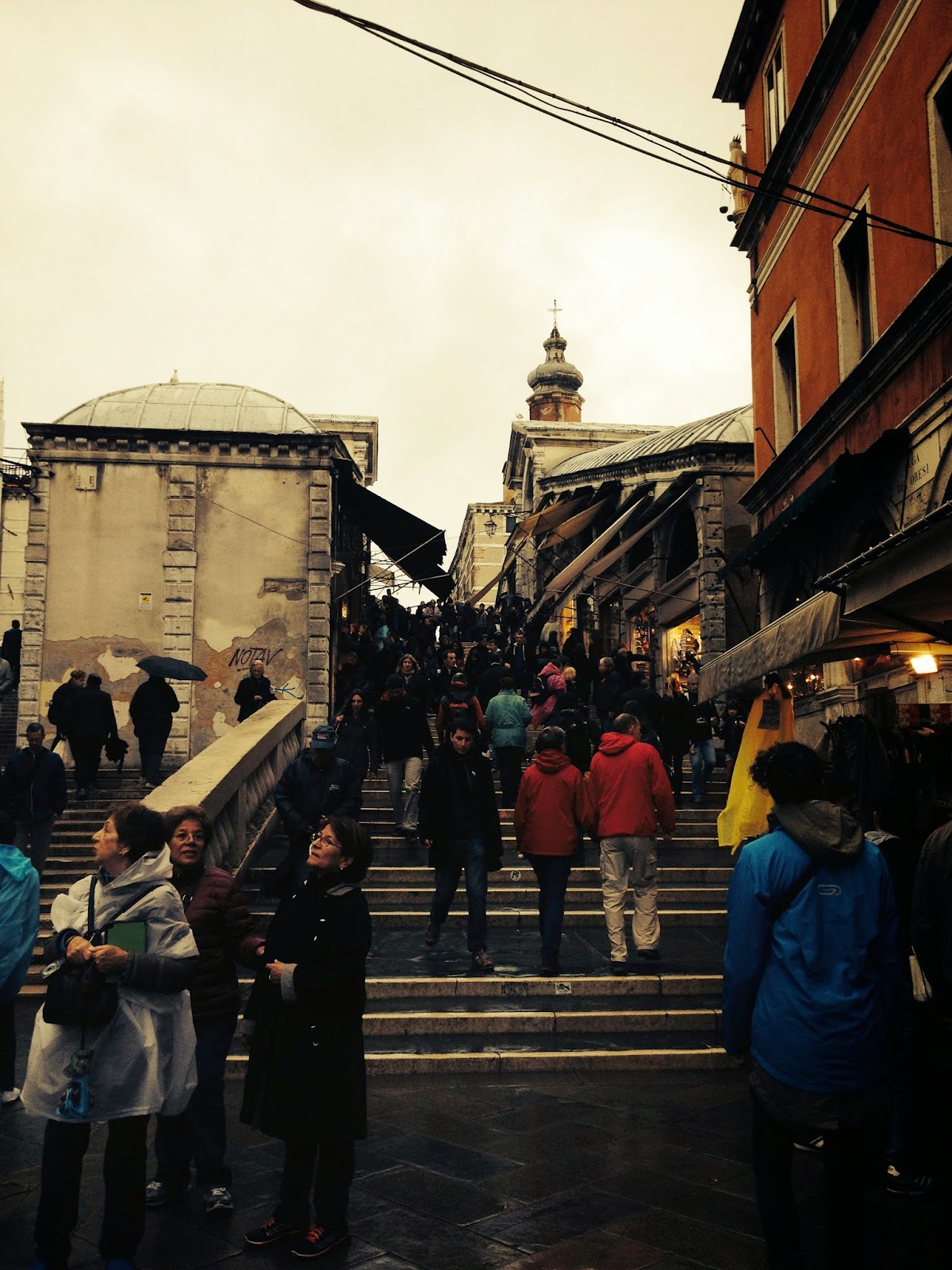 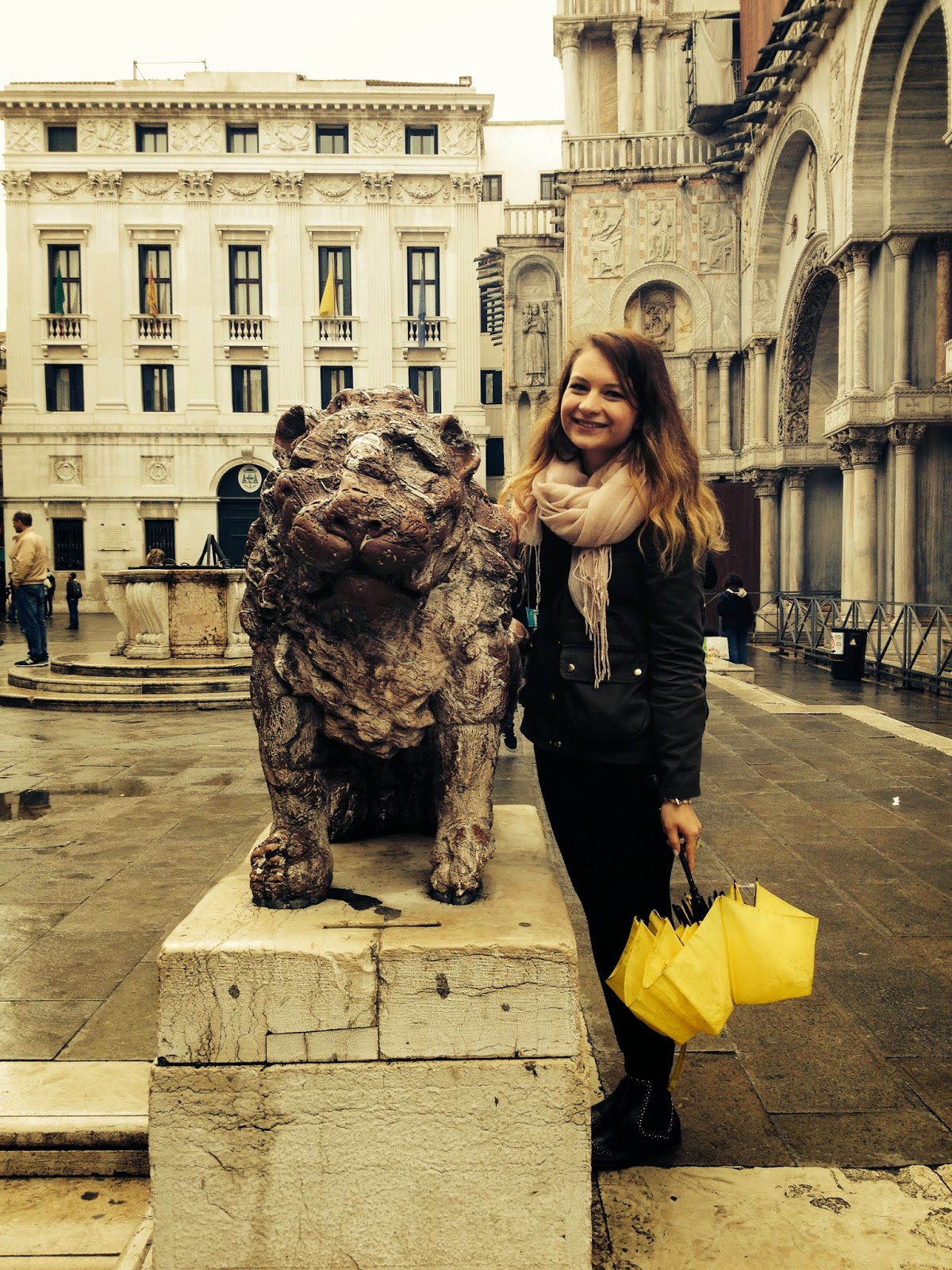 (I don’t know but I liked that lion haha xD) 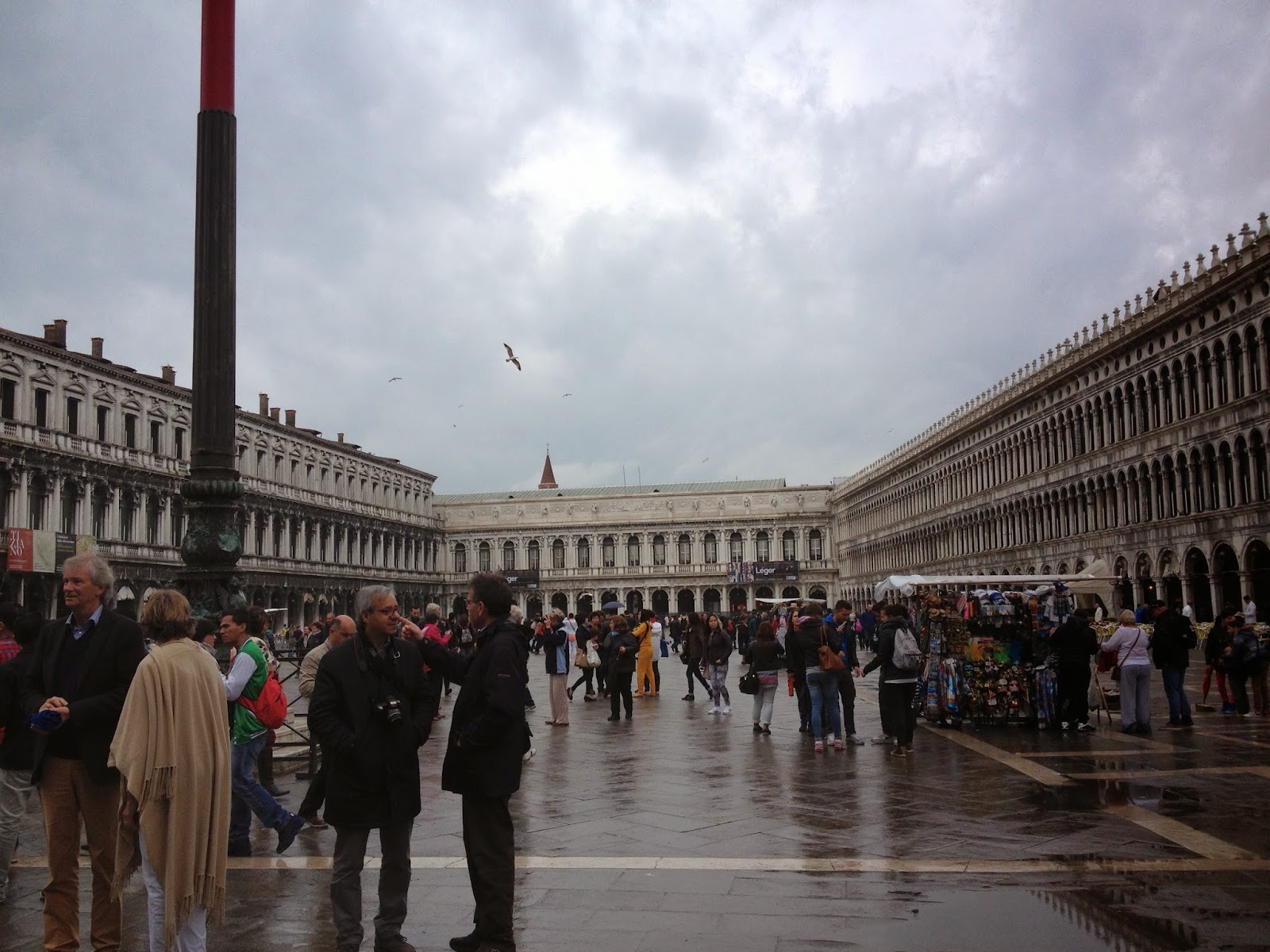 Something I am really judging about this city are the prices, like, they are beyond horrendous. If you wanna have a small cup of coffee on St.Marcus square you have to be lucky if you find a small coffee shop where the coffee doesn’t cost about 8€ which is about £6.50.
Nevertheless we were able to find a small coffee shop where we didn’t have to pay that much to get a proper latte macchiato.
The best coffee and ice cream shops in Venice can be found in the small sideways, hidden from the endless flow of people rushing and pushing through the alleys.
That’s where you can find the original Venetians having their afternoon coffee break, hanging out with colleagues and friends and ranting over football games in Italian. 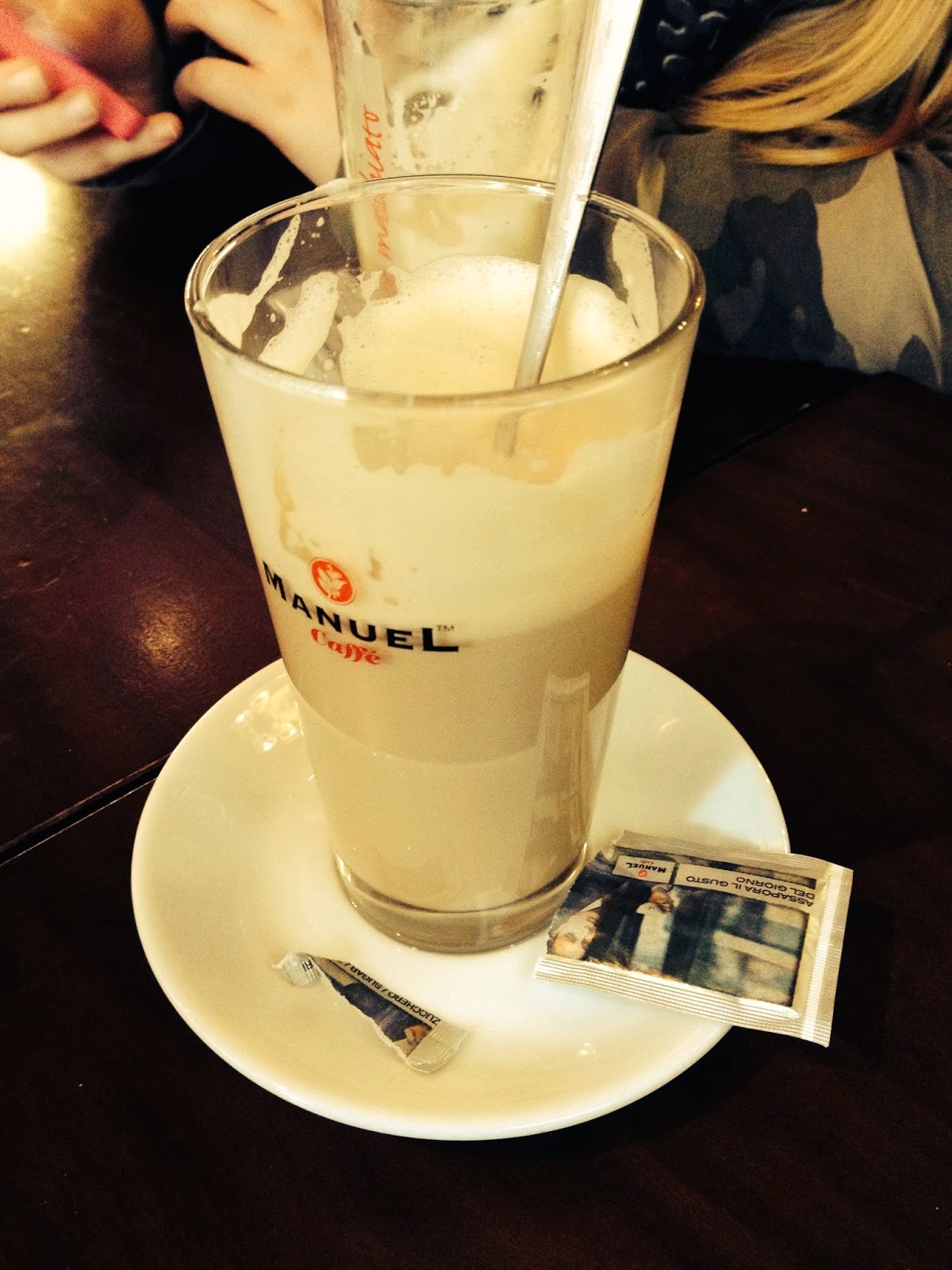 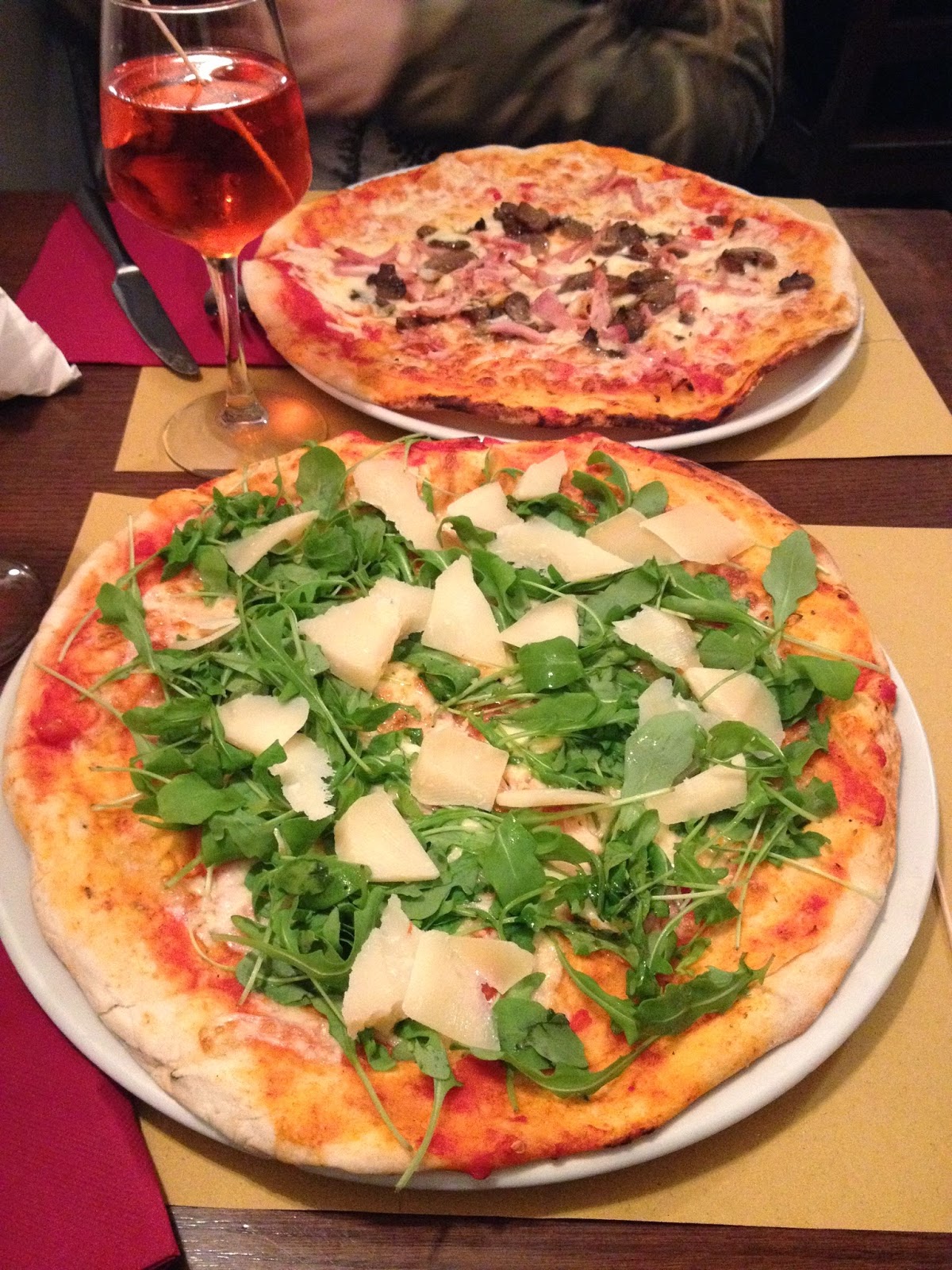 There’s no Italy without Aperol and Italian pizza
Something I really love about going shopping in Venice and Italy in general is that the shop assistants are really good to haggle with. My friend and I both wanted to buy the same cute leather bag by Vera Pelle, just in different colours and we managed to save 4€ (£3.30) each, which is a lot compared to the discount you get at other boutiques. Probably also because our charm got to him 😀
I also stocked up my collection of phone cases with another really pretty sample in a wooden style I had fallen in love with instantly after I had stepped into the small shop. 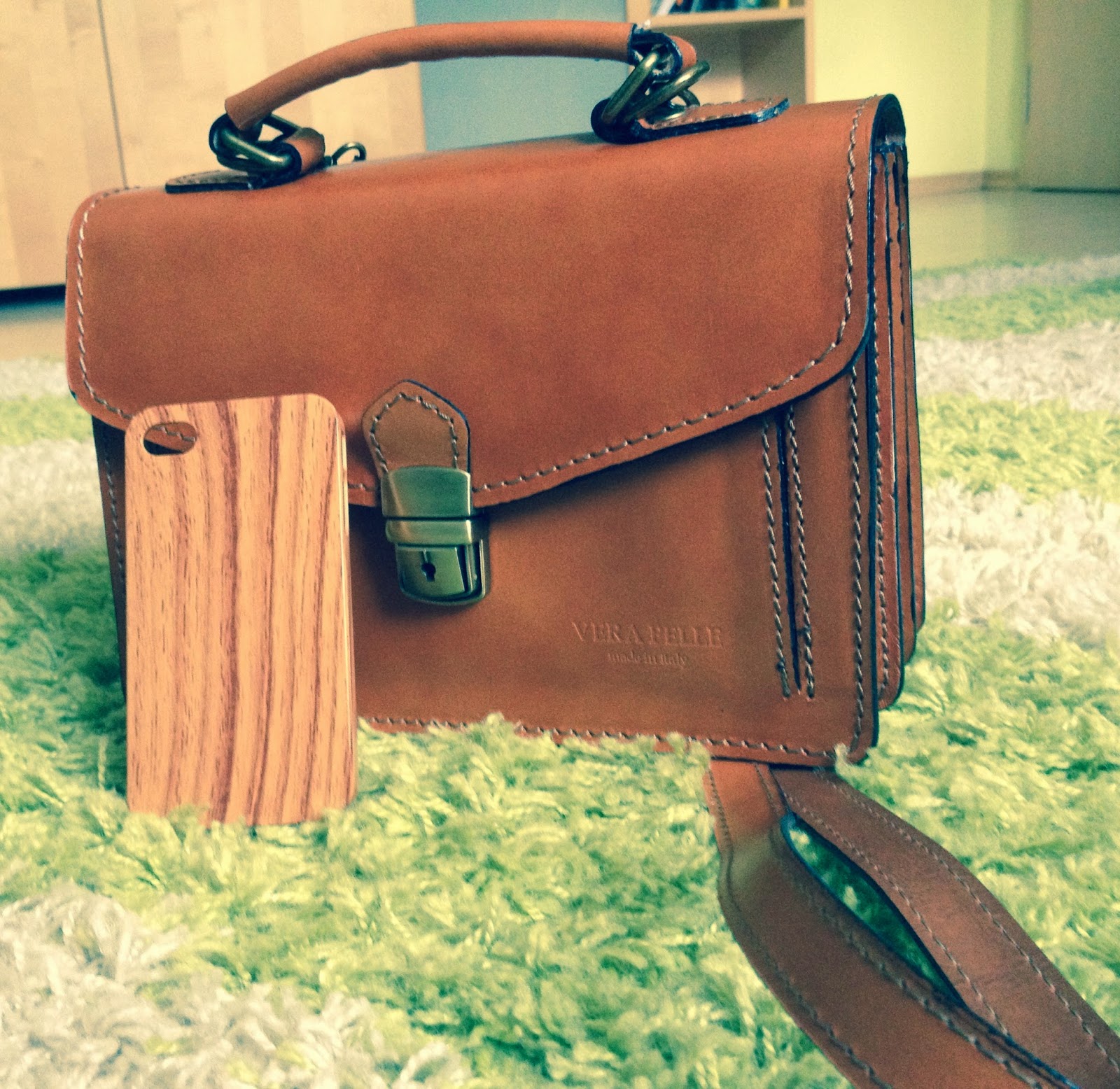 To be honest, I could have spent a lot more money down there than I actually did in the end because all those small shops and boutiques offer gorgeous and absolutely adorable pieces to buy and I really had difficulties to walk past some of those preciously stocked shopping windows.
Another highlight I definitely won’t forget was the gondola ride my friend and I took because we were convinced that a proper Venice day trip had to include something special like this.
The gondolier was a fun person to be with, kept joking and gave us pretty detailed information about the city’s history and I always appreciate it much if I get some information for my money as well, even though I have to admit that we haggled with that polite man as well.
And we even saved more than we did at the bag store. In the end both of us paid about 30€ (£25) instead of 60€ and I think that’s quite an achievement.
You just need to have the courage to talk to people even though there’s still that difficult thing with the language barrier, but you can easily deal with that if you really want to. Tactic is also something quite useful, just to give you an advice. 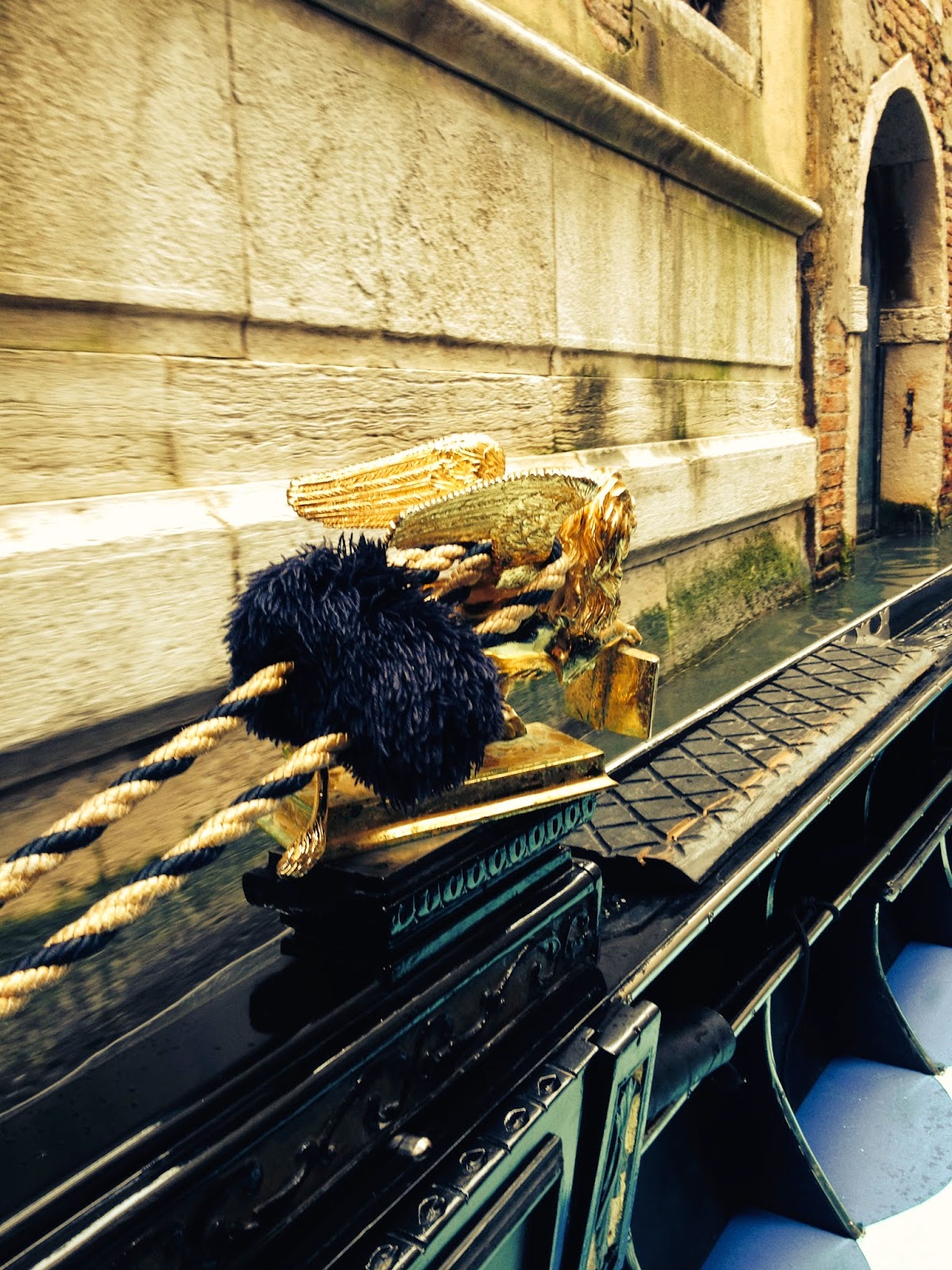 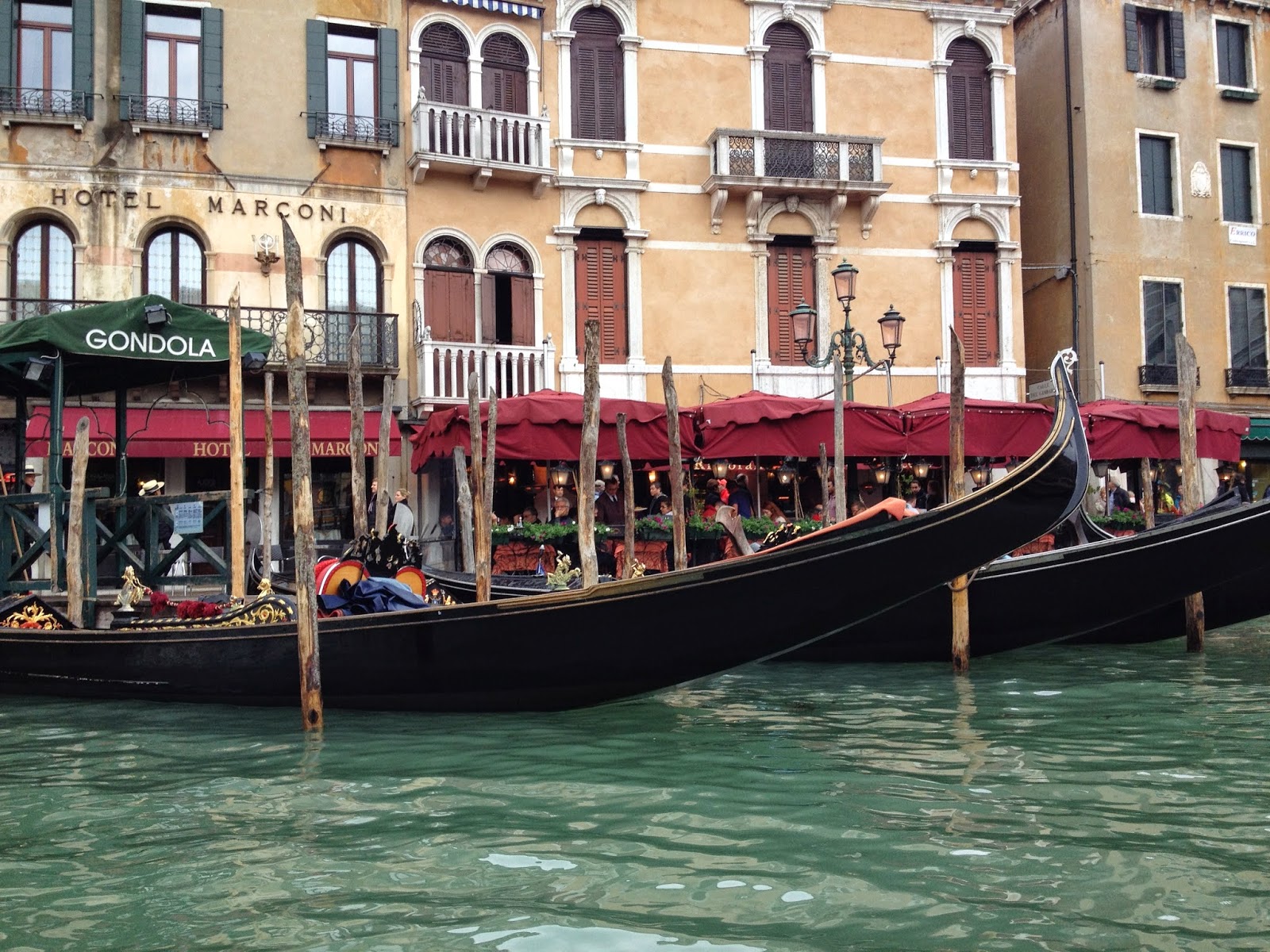 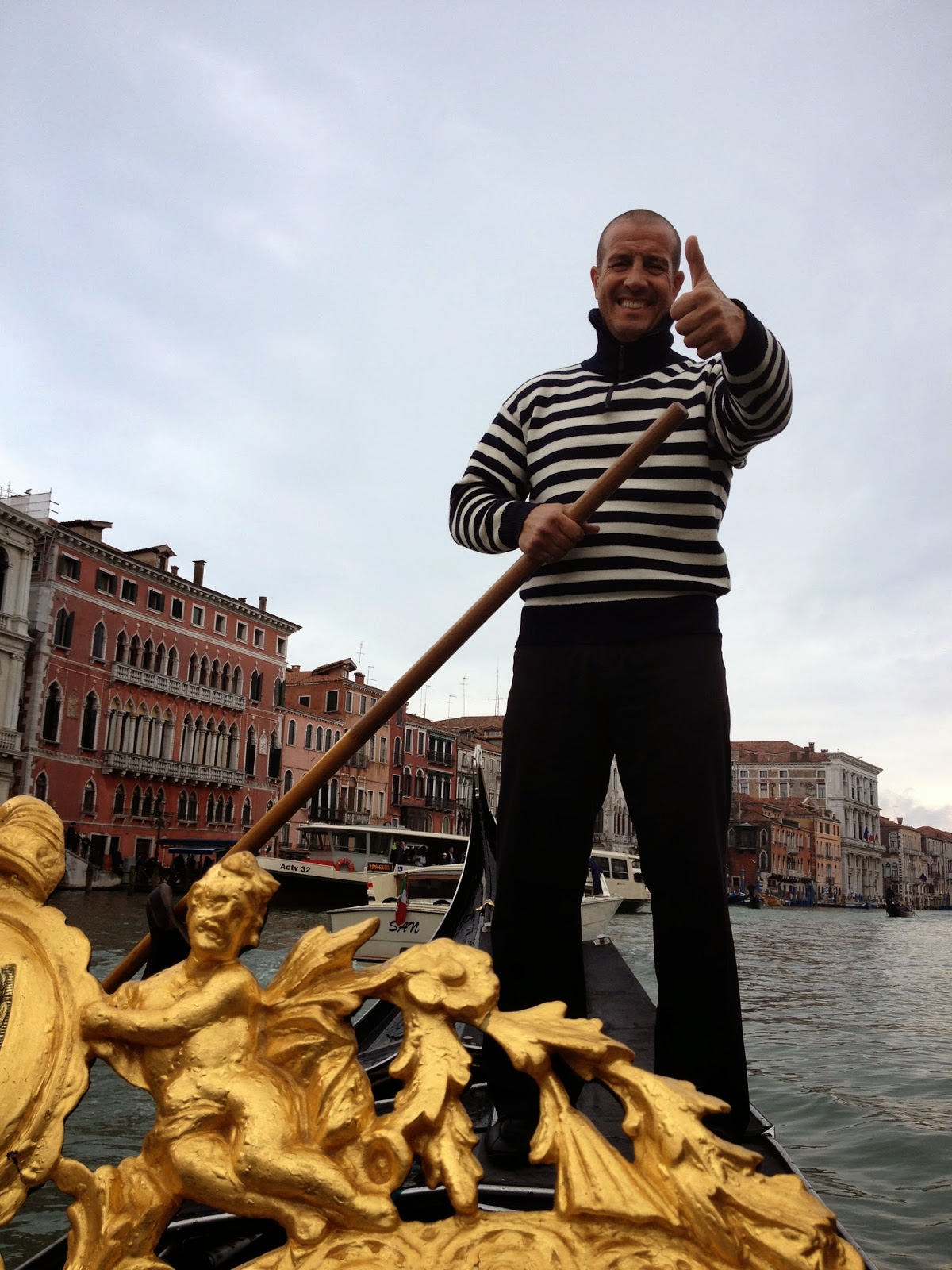 (Our gondolier was a really cool guy, I wanted to take him home haha :D) 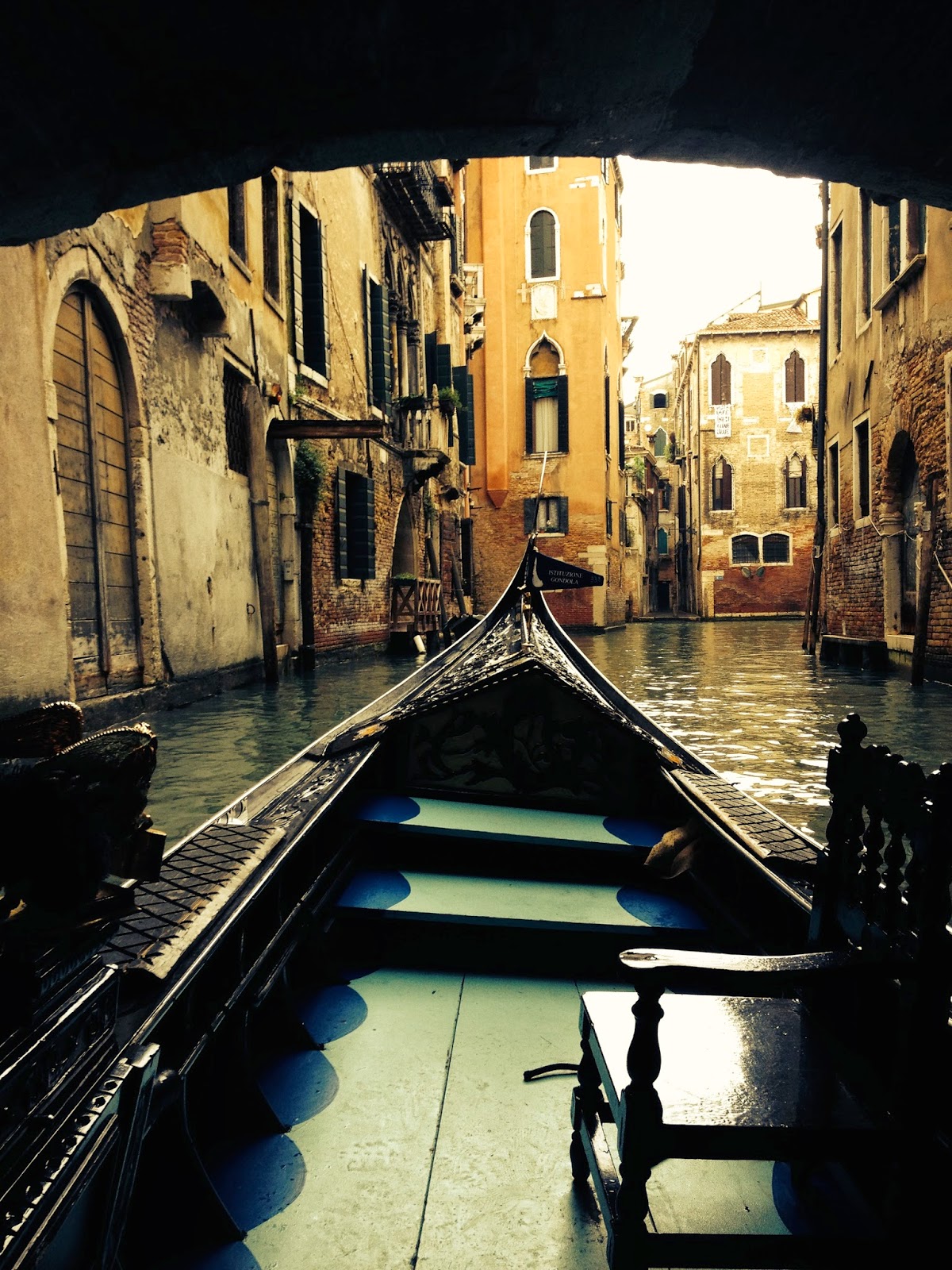 At the end of the day, shortly before we had to head back to the bus terminal in order to go home, the sun came out again and we felt a bit hoaxed as we had to cope with really unpredictable weather the whole day.
But we wouldn’t be the calm persons we are if we didn’t take it with a shoulder shrug.
In conclusion, we had an incredible day in Venice and that city is definitely something I’d visit more than once because there’s just so much to see and explore in every imaginable kind of way. The only thing that worries me is the thought of global warming ruining that city one day as the habitants have to deal with lots of floods throughout the year and the water marks are increasing steadily.
The fact that it is basically humanity’s fault saddens me deeply and I hope that people will soon wake up and realize that you can’t just let such a precious, historical city drown in the Mediterranean Sea.
Until next time –
Loads of love, MoMo xX
PS:  What is your favorite city you’ve ever been to in your life? 🙂
(The pictures are all mine.)